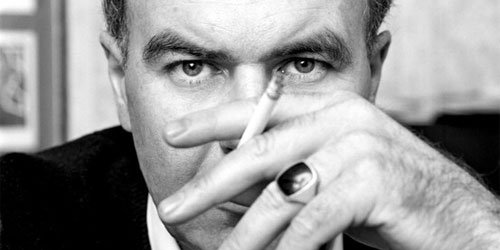 INTERVIEWER
Did you ever feel that alcohol was in any way an inspiration? I’m thinking of your poem “Vodka,” published in Esquire.

CARVER
My God, no! I hope I’ve made that clear. Cheever remarked that he could always recognize “an alcoholic line” in a writer’s work. I’m not exactly sure what he meant by this but I think I know. When we were teaching in the Iowa Writers’ Workshop in the fall semester of 1973, he and I did nothing but drink. I mean we met our classes, in a manner of speaking. But the entire time we were there—we were living in this hotel they have on campus, the Iowa House—I don’t think either of us ever took the covers off our typewriters. We made trips to a liquor store twice a week in my car.

INTERVIEWER
To stock up?

CARVER
Yes, stock up. But the store didn’t open until 10:00 a.m. Once we planned an early morning run, a ten o’clock run, and we were going to meet in the lobby of the hotel. I came down early to get some cigarettes and John was pacing up and down in the lobby. He was wearing loafers, but he didn’t have any socks on. Anyway, we headed out a little early. By the time we got to the liquor store the clerk was just unlocking the front door. On this particular morning, John got out of the car before I could get it properly parked. By the time I got inside the store he was already at the checkout stand with a half gallon of Scotch. He lived on the fourth floor of the hotel and I lived on the second. Our rooms were identical, right down to the same reproduction of the same painting hanging on the wall. But when we drank together, we always drank in his room. He said he was afraid to come down to drink on the second floor. He said there was always a chance of him getting mugged in the hallway! But you know, of course, that fortunately, not too long after Cheever left Iowa City, he went to a treatment center and got sober and stayed sober until he died.